There is no hiding it, life is stressful for me right now. I cannot remember the last time I have felt this kind of pressure. At times I can remain stoic, other times I need to let off some of the steam that's building up inside me. And the person I spend most of my free time with will notice.

That's a bit of a burden for a 7yo. But like with most experiences when you're growing up, there are very important life lessons to be learnt from that. I am after all raising an adult. And if I teach my child anything at all in life, it would be the kind of tenacious resilience that I have tried to adopt since becoming an adult myself. We can rave, rant, whinge, cry and rock back and forth in a corner, but we do not ever, never, ever quit.

One analogy I have used with Ella to explain where I'm at is the crossing the rocks in the Royal National Park. This happened back in July when we were there with my sister.

We had walked along the road from the campsite to the village for breakfast and decided to walk back via the beach. Only, about 200 meters along the beach, we came across rocks stretching from the cliff face into the ocean. There was a man fishing on the rocks near the beach, just before the cliffs made a sharp bend so we couldn't see ahead. We started walking/climbing across and I asked him if we could get through there. He said "Yes, but it's a bit dangerous". I assumed he meant "a bit" as in "with a small child" and because Ella is an expert rock climber decided to do it.

It got tricky fairly soon after that. There were waves washing over the rocks at some points. Small waves and without much force, but they went all the way across to the rock face. We pushed on. I was carrying all Ella's stuff and mine (shoes, bags, umbrellas) and sent her across the highest parts closest to the cliff. We had to wait sometimes for the waves to retreat before crossing bits. Ella soon became terrified, close to hysterical at times. She made comments about not wanting to die. By then I decided it would probably be more dangerous to turn back than to continue. So I calmed her as well as I could and encouraged her to keep going.

I must add that I did not think the situation was life threatening. But it certainly didn't feel very safe - very exposed and it just reminded you of stories of people getting washed off rocks even though these waves weren't high enough to do that and it was pretty easy to avoid them - we didn't even get our feet wet at all.

The rocks went on for a few hundred meters and you could never see more than a few meters ahead.

We pushed on. We made it. The adrenaline rush when we felt the sand under our feet was exhilarating. Ella chattered excitedly about it for an hour afterwards and was so very proud of herself for doing that. She still calls it one of her favourite parts of the holiday.

So for now I will keep repeating that to her. "This is where I am at: I'm on those rocks, the bit where the waves rushed in and where you felt like just sitting down and giving up. But I will push on and I will reach the beach." And then we'll have the most awesome, the most relaxing, the most joyful beach party!
Posted by Lin at 7:19 PM No comments:

I had just woken up.

By popular request (ie. Greer), another post. Because Ella is still as cute and funny as ever. But now with a broader vocabulary.

I walked her to school today and she went to park her bike while I tied up the dog. When I went to check what was keeping her, I saw her comparing bells with another bike-riding kid and show off her bike to a friend. When I urged her to hurry, she rolled her eyes at me and said: "Mum. I have things to DO, you know".

Then she read me her 'critique' on a kids' book about a farm that they read in class. The review was meant for the library.

It was very well written (I'll have to wait till the end of the year before I can post the whole thing) and full of delightful phonetic spelling. But what made me laugh was the fact that her last sentence started with: "Farmers would like this book".
Posted by Lin at 4:47 PM No comments:

A conversation prompted by an episode of My Kitchen Rules:

Ella - The sore losers, you know the boy and the girl? The boy just yelled "Go on girls! Love you!" at those other girls that are cooking. I bet the girl thought that was a bit mean.
Me - They aren't a couple though, they're just friends.
Ella - You would have to be very, very good friends to go on a cooking show together. Me and Katie could do it!
Me - Does Katie like cooking?
Ella - Yes, she does. And she is not fussy about food either. She eats grass.

The things that matter

Me - God Ella, we are so disorganised. We'll never get this bedtime routine down pat, will we?
Ella - But at least we have our friendship.

Nothing to add to that...

Ella - You know how boys when they grow up, grow into men, how most of them are stronger than girls?
Me - Yes. But you know how I always tell you what's way more important in life than how strong you are?
Ella - But girls or women are better at hanging onto things. They can hold on longer to the monkey bars for example.
Me - That can be true, but you know what I think is way more important than being strong OR hanging onto things. You know what I'm going to say, don't you. Being...?
Ella - Alive?
Me - Yes, that too. Not much use hanging onto the monkey bars when you're dead, is it? But I was going to say being s...m...smart.
Ella - Oh, I thought you were going to say 'Being kind'.


It evolved into a conversation about equality and suffragettes. And ended with Ella's statement that girls have power. That she has power. Girl power.

I parked the car on the side of the road in Braddon and left Ella and Banjo (the dog) in the car while I quickly ducked into Officeworks. I made sure I closed the windows on the street side, the dog's side, so there was no chance of Banjo jumping out onto the street. There are quite a few cafes in this area and it's usually a fairly busy area.

When I got back in the car, Ella and Banjo were sitting in the same positions I left them in, so I didn't suspect anything. Then Ella said:

Ella - Banjo jumped out of the car.
Me - Really? That must have been a bit scary.
Ella - It was.
Me - Did she jump through your window?
Ella - Yeah.
Me - How did that happen.
Ella - Well, I was on the roof of the car about to do some hula-hooping.
Me - As you do.
Ella - Yeah and then I saw Banjo, about a kilometer away. So I had to climb off the car and get her. And then I had to sit in the car with her so she couldn't jump out again. And people kept telling me to get off the car.
Me - So what did you say to them?
Ella - I said: "I've done this before".

Is it my imagination or is she getting more Pippi-Longstocking-esque each day?

For the sake of OH&S, I will have a chat to her about appropriate and inappropriate places to perform circus act on the car roof.

I missed this performance, but a friend snapped this picture when we were camping at Mystery Bay. 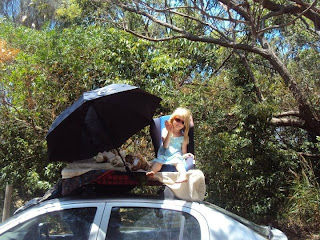